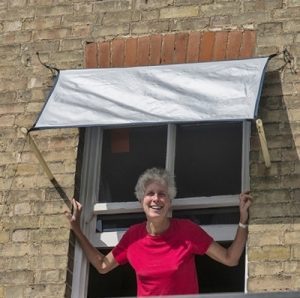 When Tom suggested last year that we should be an Open Eco Home, I was a little nervous: Did we have enough to show people? Would they criticise my standards of housework? Looking back, those fears seem rather irrational, but they were real at the time, and I suspect quite common amongst other Open Eco Home hosts.

We’ve steadily been improving our home (an Edwardian terrace) since 2001, and this has had a substantial impact on our energy use. Our gas consumption is a quarter of what it was and electricity consumption has halved. But, as must be the same for most people, we tend to forget this and are more focussed on the things we still have left to do. It was only when we sat down together and started listing what we’d done, that we realised we actually had quite a lot of interesting things to show people.

Some of these are neat products we’ve found, but others are our own “inventions”, like the demountable awnings we’ve made (shown in the picture above) to keep south facing rooms cool on hot summer days.

Our home has what I like to think of as a comfortable lived-in look, so it’s very far from the sort of immaculate show home you see on Grand Designs. Before our first Open Eco Homes year, out of nerves, I did spend quite a lot of time tidying the place up (no bad thing!) It was also quite a good incentive to finish off some part completed jobs. But as soon as the visitors actually arrived, I realised the obvious: they were people like us, and all much more interested in the eco-improvements than my housework. 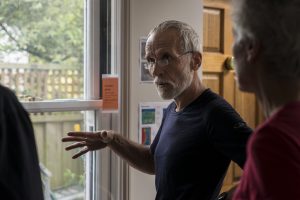 I found that showing people round was really satisfying, because they were so interested and appreciative. One visitor said he’d been reading up about these things for ages, but it made so much difference to be able to see it for real.   Another woman, who had a house very similar to ours, was so excited she asked if could come again with her husband!

This made it all feel really worthwhile, so I had no hesitation at all at offering to do it a second year. It was also much easier the second time, because we knew what we were doing.

Doing 4 tours in a day would be quite tiring, so Tom and I find it works quite well splitting the job: he may lead the morning tours, while I do the afternoon sessions for example. CCF have also been good about combining and closing sessions if bookings are low, so you don’t waste your time. We think carefully about which rooms to include or exclude from the tour, and have a written down list of what we want to show people in each room. We find this all makes it much easier than we’d initially thought.

Overall, we find hosting Open Eco homes satisfying, and definitely worth the effort, so do join us next year!