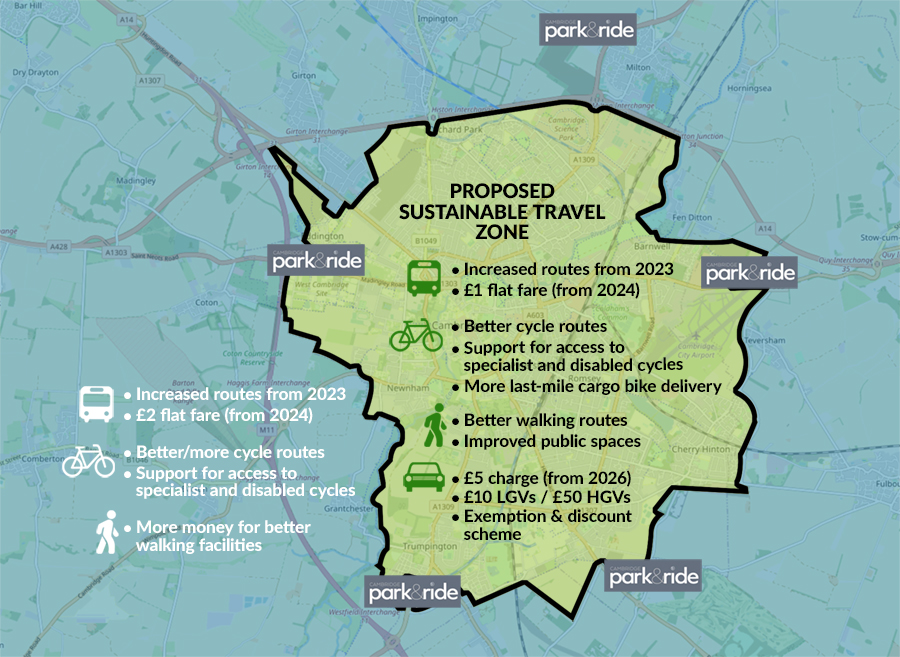 On Friday 26 August 2022, the Greater Cambridge Partnership (GCP) announced proposals for a transformational change to the city’s transport network to be developed over the next six years. We think the proposals are an exciting opportunity to make our city not only more sustainable but also fairer and healthier: with faster, cheaper, more reliable bus services, and better infrastructure for walking and cycling.

We spoke to Anna Williams at Camcycle to find out more about the proposals and how we can all get involved in helping to shape a sustainable transport future for our region. See below our Q&A.

What share of Cambridge’s emissions currently come from transport and what are the expected emissions savings from the scheme?

Surface transport accounts for around 20% of carbon emissions in Cambridge city, 35% in Greater Cambridge and 44% in the wider Cambridgeshire and Peterborough region, so it’s a significant proportion. Most of those emissions come from cars. In its Strategic Outline Business Case, the GCP predicts that the Sustainable Travel Zone scheme would cut the number of car journeys in Cambridge by 50%, saving 33,300 tonnes of CO2e in the first year and 1.28 million tonnes over a 60-year appraisal period. Carbon Neutral Cambridge describe it as a “exciting opportunity to make our city fairer, healthier and lower carbon” and point out in their new Greater Cambridge Decarbonisation report that although transport emissions are decreasing in Cambridge city, a lot more progress is needed in South Cambridgeshire. The bus and cycling improvements (such as the Greenways and onward links) will be essential parts of the path to net zero.

What’s the difference between a congestion charge and a sustainable travel zone?

The Sustainable Travel Zone has two main goals: to reduce levels of motor traffic and to secure a long-term funding source for walking, cycling and public transport. Congestion is just one of the issues being tackled; we know that investment in high-quality alternatives to driving is essential in enabling people to switch more of their journeys to sustainable travel. Once these are in place, they bring a host of other benefits. Places with fewer cars are cleaner, safer, fairer and more sociable. Space can be freed up to protect and celebrate our historic buildings, develop public squares and green spaces where people can spend time, and provide new facilities such as seating and cycle parking.

What are the proposed improvements to public transport? Is it more buses on the same routes or new routes? How will prices change?

Improved bus services are at the heart of the proposals and, if the scheme is agreed, improvements would start next year. The aim is to rebuild the bus network with new, direct routes between residential areas, towns and villages, employment areas, education and key services including health and leisure opportunities. New fares would apply from 2024: a £1 single fare for trips in Cambridge, and a £2 single fare for journeys in the wider area plus fare caps and special tickets to ensure low-cost multi-stage journeys and family or group travel. There would be more early morning, late evening and Sunday services, running from 5am to 1am Monday to Saturday, and 5am to midnight on Sundays. In rural areas, new regular services would be supported by bookable buses known as ‘demand-responsive transport’ so that every village would have access to a bus service.

The aim is also to work with the Mayor and Combined Authority to ‘franchise’ the bus network. This would mean that the local transport authorities could make decisions around the demands of users and bus operators would be contracted to provide the services. The network could be planned holistically with simplified ticketing, rather than routes being decided on how profitable they might be. The recent short-notice announcement of cutbacks by Stagecoach and the scramble to protect routes shows how important it is to take back control of this vital public service.

Are there any other ways to fund public transport improvements in Cambridge? Do we have to pay for this locally or is there central government funding?

Local authorities have limited choice. The Combined Authority is the strategic transport authority for the area and their proposal for a ‘Bus Service Improvement Plan’ which included franchising and an overhaul of rural services failed to gain funding from the Department for Transport (DfT) earlier in the year. One of the reasons given was that the DfT believed our region had an “insufficient commitment to road charging, active travel, and bus priority schemes“. The Combined Authority also missed out on walking and cycling funding due to a lack of ambition. It’s clear that central government wants to see commitment to the prioritisation of sustainable transport before investing further.

Government also caps local council tax increases at 2%, so while that might be another option to raise funding it’s fairly limited. The GCP does have money (through a ‘City Deal’ investment package) to start to get the bus improvements in place, if the public and local politicians agree.

Is this a yes/no consultation or is there an opportunity to make suggestions to alter the proposal? E.g. exemptions, boundaries, time of day…

Camcycle has joined with Cambridge Living Streets (who campaign for better walking) and Cambridge Area Bus Users to form the Cambridgeshire Sustainable Travel Alliance. Do join us and get involved!

We strongly support the proposals for a Sustainable Travel Zone but do encourage everyone to share your views on the walking, cycling and bus improvements you would like to see in place. Question 9 of the consultation survey asks whether you support the introduction of a Sustainable Travel Zone but there are also separate sections where you can share more specific views on the proposals for buses, cycling and walking, as well as the proposed road charge area, cost levels and hours of operation.

What does all of this mean for people walking and cycling?

Additional funding and roadspace is required for future improvements such as those set out in the GCP’s Cycling Plus consultation. The Sustainable Transport Zone could provide both of these, as revenue raised would be used to fund active travel projects as well as buses, and the reduction of car traffic on the roads would free up space for better cycleways and pavements. The GCP says an estimated £20 million annually will be available for investment in walking and cycling infrastructure.

Where do I find the consultation, how long will it take me to fill in and do you have any recommended responses to save me time?

Read more about the proposals on the GCP’s consultation website, where you can also find a consultation brochure, interactive bus map, background documents and details of online and in-person consultation events.

The consultation survey will take up to 30 minutes to complete, plus time to read the associated information. For a quickstart guide, check out Camcycle’s consultation guide, Cambridge Living Streets’ consultation guide and the 5-minute summary guide from the Cambridgeshire Sustainable Travel Alliance. Please fill in the consultation as soon as you can and share the shortlink (tinyurl.com/STZ-survey) with friends and family to encourage them to have their say too.