Over three days in June 2016 I set out on quite an adventure – exploring on foot fifteen of the charity shops on the CirculART Trail in near-central Cambridge. Here, displayed in both shop windows and retail interiors for one month, was a dynamically diverse array of artworks made by over two dozen local artists. All had been sourced out of everyday scraps and bits of detritus; also from once perhaps individually treasured yet now abandoned oddments. 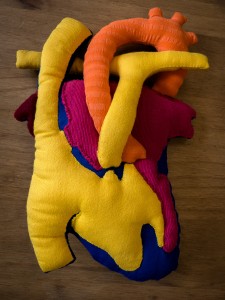 Jenny Langley, a local textile artist, imaginatively initiated and co-ordinated this ambitious project. She says, ‘I love charity shops. It’s my first port of call if I want anything. I love the serendipity of what I find there. I’ve got two thirds of the charity shops in Cambridge involved this year. We have a lovely mixture of artists now, some professional, some amateur, and two groups of artists with learning difficulties, who created fabulous window displays. Everything we’ve placed in the charity shops has been upcycled, reused, reclaimed, re-purposed in some way.’*

Alana Sinclair, Co-ordinator of Cambridge Carbon Footprint, explains how challengingly innovative this recycled art project has been. ‘We think we are the world-first in terms of pairing artists and charity shops together, and the first reclaimed art trail hosted in charity shops. The displays creatively showcase what can be done with recycled materials: waste isn’t waste until you waste it.’*

Just to single out a few highlights on this art trail:

Jane Helling’s immaculately crafted, hand-stitched soft sculptures (made out of recycled textile fragments) modelling human heart defects – one of which, Sacred Heart Defect, is, she says, ‘a 3D representation of my son’s unique set of defects, which he was born with 20 years ago’. Possessing their own surreally serene, upbeat beauty, these poignant works (at once semi-abstract and semi-anatomical) were displayed, suitably enough, in the shop window of the British Heart Foundation. Helling says, ”It makes a difference to your own whole creative process if you have to work with you’ve got or what you can find – and not go out and buy whatever you want. Happenstance is important in my work.’* 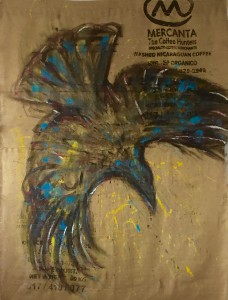 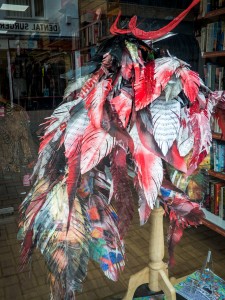 Ann Templar’s outrageously exuberant yet deftly fabricated parade costume that she had worn at the Opening of Cambridge’s Strawberry Fair. She calls it ‘a political piece of art, incorporating a broken umbrella for the framework, sheet music and records and artwork donated by SENSE [the charity in whose window the costume was displayed] that I re-purposed into a plume of tail feathers’. Her visionary aim here was to reflect the soaring freedom of songbirds to transcend arbitrary human borders as opposed to the cruel silencing and ‘restrictions our brothers and sisters are suffering in the current refugee crisis’. 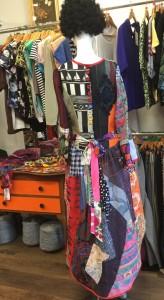 Cathy Dunbar’s elegantly eclectic The Lettuce Dress – in which the ever-fluctuating fabric – and ephemeral beauty – of our lives is reflected in a design using many skilfully conjoined fabrics. Some of these came from clothes that the YMCA charity shop (where the work was displayed) was unable to sell, some from the artist’s own grandmother’s stash of 1920s and 30s’ textile bits and pieces. This is an audaciously harmonious creation fashioned out of a mass of fragments, including English chintz, chic French swatches, Nigerian cloth of bold archetypal design, and swirling sixties’ psychedelia of quite pungent saturated colour.

Judy Logan’s monumental, ominously swooping crow – its dark figure luminously splattered with turquoise and yellow (using reclaimed paints) against an asperous background of a recycled coffee bean sack sourced from a local café (with the engaging original packaging script still intact). Titled I’M FREE, this at once philosophical and visceral work was partly inspired by poetry – especially apt as the work was shown in the Amnesty Bookshop window – such as Ted Hughes’ lines: ‘Crow was so much blacker/ Than the moon’s shadows/ He had stars’, and William Blake’s ‘No bird soars too high, if he soars with his own wings.’

In 2012, the Cambridge Mill Road Oxfam Shop won the Joe Mitty Award ‘for the imagination, flair and enthusiasm that has made [it] a treasure trove for the eclectic – and a huge success in raising money for Oxfam’s work’. No small part in this success has been played by the artist Chris Gould’s subtly pervasive, inspiringly counter-cultural contribution to the shop’s overall fabric and atmosphere. 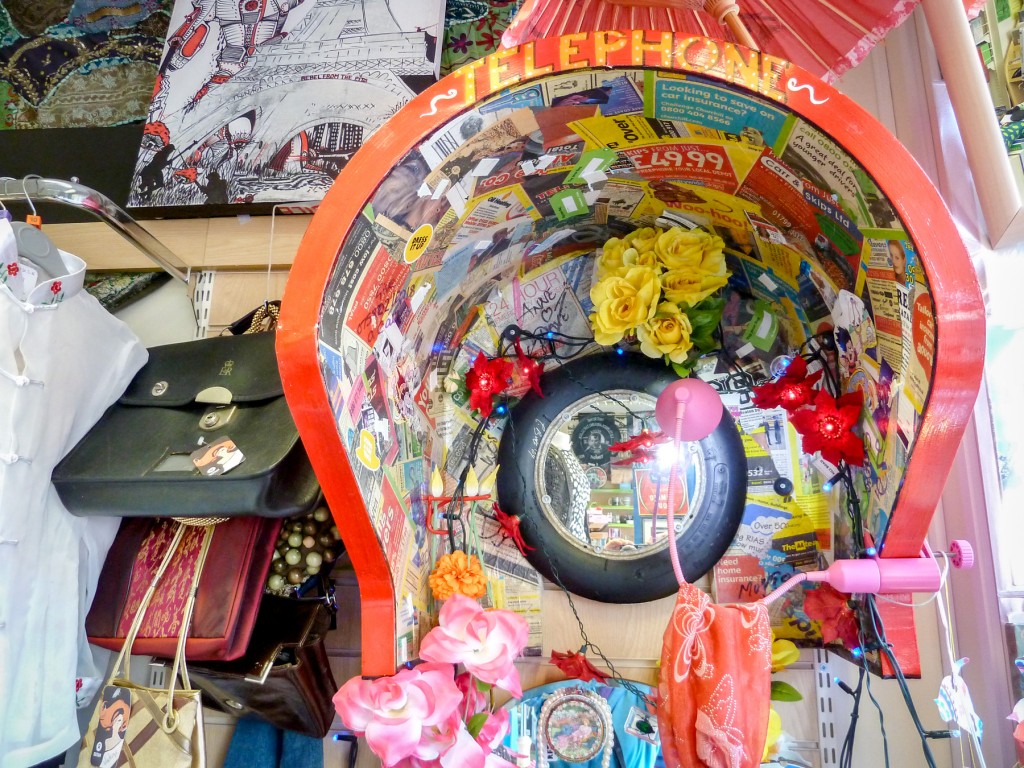 Everywhere are his magical transformations: for example, seventies chrome bar stools ‘upholstered’ with intricate découpage, juxtaposing a fantastically bizarre, often comical range of images from all kinds of popular newsprint and streetwise sources. Elsewhere, mundane objects such as redundant telephone kiosk hoods, basic, rather tacky clocks and antique, ramshackle suitcases are decorated, graffitied and découpaged – changed into something ‘rich and strange’ – by his fluent associative poetry. This encompasses hallucinogenic images of figures such as Bob Marley and Jimi Hendrix, apocalyptic skull forms emerging eerily from dense vegetation, compelling madcap cutouts from old Beano and Dandy comics, and exotic though quotidian folk culture references to items such as cheap Indian matchboxes. In this artist’s fertile universe, nothing is wasted; everything, however unpromising, can be playfully redeemed and vibrantly recycled.

Philip Vann is a writer on the visual arts. Since 1984, he has written a number of books on contemporary British and Irish artists, and is author of the critically-acclaimed ‘Face to Face: British Self-Portraits in the Twentieth Century’ (2004). He has written on art and design for RA Magazine, Galleries, World of Interiors, The Economist, The Guardian, The Independent and Resurgence Magazine. He lives in Cambridge.

* these quotations are taken from an illuminating new film, CirculArt. Or: How I learnt to stop worrying and love my stuff, Directed and Edited by Jonne Howard and Produced and Interviews by James Murray-White. It can be seen on Cambridge TV.