My name is Bernard Shaw. I have lived in a 1930s terraced house in Romsey since 1978. Having retired from work as an analytical chemist with an agrochemical company, my vegetable garden leaves me almost self-sufficient. I am involved in the Justice & Peace Network as a member of the Cambridge group, Secretary of the Diocesan Commission and member of the National Environment Group.

How long have you been involved with Cambridge Carbon Footprint and what is your role?

For 5 years and in that time have been involved with Climate Friendly Homes and as a Thermal Imaging Surveyor, a helper on stalls and an Open Eco Home steward.

So, what do you actually do?

I’ve carried out a number of Climate Friendly Homes surveys, some of which have helped householders to make significant energy efficiency improvements. Open Eco Home hosts seem to value my role as a steward – I can help them with the mundane admin tasks associated with showing their home energy projects to groups of visitors. I’ve helped on stalls at CCF and community events such as Mill Road Winter Fair. Both involve encouraging people to engage with current CCF projects and signing up to the newsletter. A few have been dismissive of the value of  footprint  reduction, but many more have spoken constructively about more sustainable living.

Why do you volunteer with CCF?

I first focused on making my own home more energy efficient after being a member of a local CAFOD Renewing the Earth study group back in 1990, but only began to put ideas into action in 2008. Since becoming involved with CCF through Carbon Conversations, I am far better informed on the most appropriate measures to take and intend to enact these before too long. Perhaps one day my house will qualify for consideration as an Open Eco Home! I value being involved with an organisation which has contributed to making homes less dependent on unsustainable fossil fuels.

What are or have been the best bits?

Just many of the conversations that have led to positive actions.

If you were to encourage new people to volunteer with us, what reasons would you give?

There is positive value in sharing with others on more sustainable living.

Flexible – because CCF adapts to changing circumstances, such as funding availability. Informed – wealth of information on the website. Motivating – encourages take up of projects 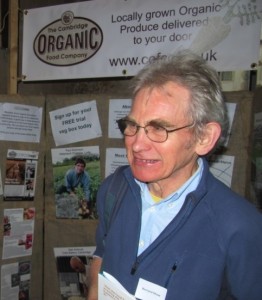