Meet Dan, a local physicist from Histon, who loves spending time outdoors whatever the weather. When he’s not analysing numbers and data, you can find him in the Cambridge countryside walking, cycling and running or trying to keep his garden under control, and since the mid-90s Dan has been engaged in community woodland creation.

He first got involved in a tree planting event near Histon, planting what appeared to be lifeless twigs into a muddy field. He soon found that patience is key when creating woodlands; for the first few dry summers that followed the event, the area appeared to be just grassland, however 25 years later there is now a biodiverse woodland with an understorey of self-seeded trees and canopies of birch, oak and alder! What was an East Anglian mono-culture has been transformed into a haven for birds, insects and other wildlife.

“There is something very rewarding about creating woodland …it takes a while but is possible for us all.”

Dan is now part of the Community Orchard in Histon and Impington. Back in 2011 a small group met by chance in Histon one evening, and what started as a random gathering became a group of committed individuals who wanted to plant an orchard. Three years later, this group of dedicated volunteers have planted 70 fruit trees and over 250m of hedging, establishing a vibrant community space where people and wildlife can co-exist and thrive together. They have created a recreational space used by many in the village, a haven for wildlife, a place where people can learn traditional skills such as pruning and hedge laying, a source of wild fruit for anyone to use, and have created a local carbon sink. 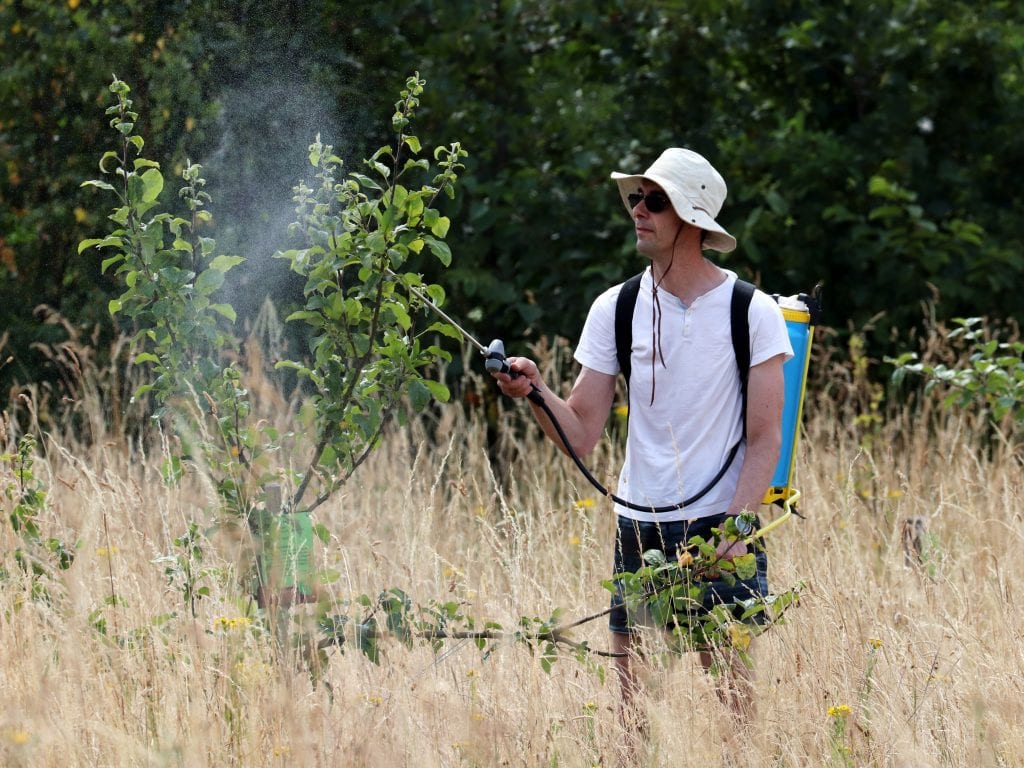 “But does tree planting really reduce carbon footprint significantly?  I must admit my main reason for tree planting is habitat creation, but the numbers suggest it does.  A fully grown tree absorbs about 20kg of CO2 per year.  And in the UK we each, on average, generate 5 tonnes of CO2 per year.  So if you plant about 250 trees that grow to maturity, your trees will be absorbing your share of CO2 output.  It’s a large number, but not impossibly large, and shows that tree planting, combined with other cuts, can make a really big difference.”

What is the connection between planting trees and climate action?

From the first project that Dan got involved in, to the Histon and Impington Community Orchard, every tree that Dan has helped plant has also captured carbon. Increasing tree and woodland cover play a role in climate change mitigation, removing carbon and helping the UK reach carbon net zero. The Woodland Trust has worked out that we need to increase the UK’s woodland cover from 13% to at least 19% to achieve net zero by 2050, and community projects such as this are key in helping make this possible. The UK Climate Coalition also highlights the need to protect UK nature, as it is our front line defence against climate change impacts, such as flooding, a likely impact of climate change in Cambridge. Natural biodiverse ecosystems are also more carbon rich and resilient to climate impacts. Additionally by planting native woodland with UK-grown trees we can create habitats and havens for wildlife, helping protect local biodiversity.

So how can we adopt tree planting on a large scale to help carbon capture and create local habitats for wildlife? From Dan’s experience he emphasises that it needs organisation and a community effort, and if you are wanting trees in a particular location you need to be prepared for it being a long process. However if you are committed and have the drive, anyone can be a part of creating this positive change.

Dan found that one of the reasons that the Community Orchard was a success was down to them having the right group of people. Although none of them had any previous experience of orchard planting, they networked and learned as a group as the project developed. They talked to lots of people, such as other orchard groups, the East of England Apples & Orchards Project, Cambridge Past, Present & Future, Chivers Farms and many others.  They also learned lots of new skills, from fundraising to negotiation with landowners to how to prune an apple tree.

One unexpected outcome of the project was just how well used the orchard is and Dan finds it a joy to see how many people visit.

Dan already has a new project on the horizon with the Cambridgeshire Tree Planting Community, planning the planting of 1400 trees near the A14 in Histon. And he is still learning as he goes – this time on how to collaborate with large government agencies, such as Highways England, and local and further afield landowners.

Dan has shared a motivational tip for anyone thinking to get involved in planting trees in their local area:

“The best time to plant a tree was 20 years ago.  And the second best time is now.  So go for it.  But if you want to plant more than one, be prepared to be both persistent and patient!”

Cambridge Past Present and Future

Dan’s case study is a perfect example of how local people can take community action on climate change, no matter an individual’s previous experience. We can all make a difference and be part of the solution in Cambridge – whether that is becoming a local climate leader and raising climate awareness in the community or taking local action, or by making individual changes to our everyday lives. Make a difference in Cambridge and join the other members of the community already taking action by signing the Cambridge Climate Change Charter.